No superpowers to note 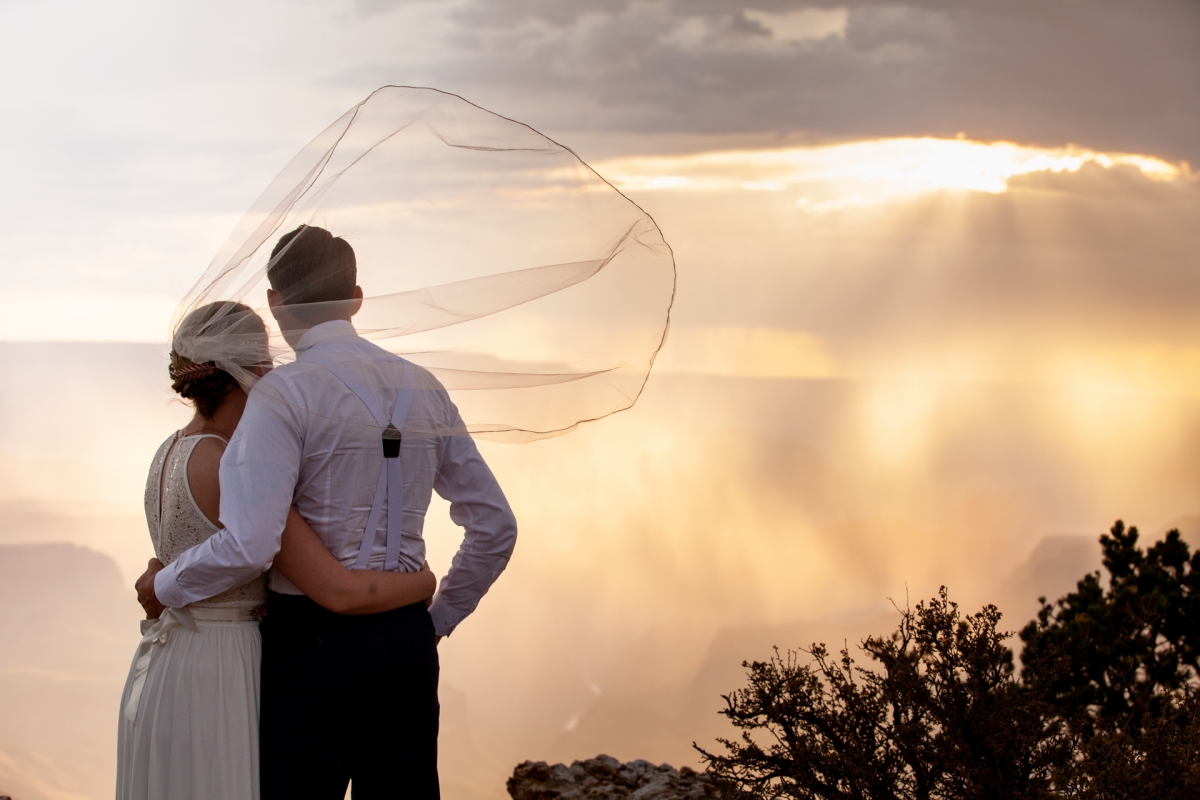 On July 26th I was struck by lightning.  Yes, you read that right.  Struck. By. Lightning.

I was shooting a small elopement on the rim of the Grand Canyon.  I’ve been working there for years and am smart if I work in weather.  Storms brew quickly there, and you can always seem them approaching from the North Rim.  They glide easily across the abyss and can approach quickly, but you can always seem them coming.  On July 26th, it was different.

I was keeping one eye open during shooting, keeping my eye on the approaching storm.  It wasn’t raining but was cloudy and windy.  The minister had just announced the couple ‘husband and wife’ and shook their hands and was walking to his car.  I was positioning the couple for their portraits, knowing I was going to have to work fast due to the approaching storm from the North Rim seven miles away.

When I photograph couples at the canyon, I always use Off-Camera-Flash, which is attached to a lightstand that I steady with my foot.  The higher you can get the flash on a couple, the more pleasing it is, but with the winds at the Grand Canyon, I always have to steady it with my foot.

But that day, even with winds approaching 30 mph, a voice inside my head said….”Move the lightstand away“.

So I did.   I moved the lightstand about 6 feet from me, to my left.

About 20 seconds later, the winds kicked up, it started to rain and I heard a clap of thunder to my rear.  Then it happened.  Time stopped.

I saw the lightning come down, it made a cage around all of us and hit an umbrella of the wedding planner and my lightstand.

My attention turned towards the lightstand…as the lightning hit it, it immediately threw it towards the canyon about ten feet away.  The flash was thrown even further away.  The arc, luckily with less energy at this point,  reached towards me and went up my back.  I fell.  I couldn’t breathe.  I wanted to run but all I could do was look around.  And then, it was over, I was alive but confused.

A flurry of events happened quickly after that, all are of which are a blur to me.  The wedding couple, where were ironically Army EMTs assisted me and the wedding planner to our cars.  I remember them yelling at me to move, but I couldn’t go as fast as I needed.  I remember the Park Ranger showing up and announcing someone else had died of a lightning strike.  I remember being in the ambulance with electrodes attached to my heart which luckily showed no damage.  I remember the Hungarian lady who rode back to Flagstaff with me who wouldn’t stop f-ing talking.  All I wanted was quiet.  All I wanted was reflection.  All I wanted to know is how I survived when all odds pointed to me dying.  I remember going to the ER in Flagstaff and running into a friend and hugging her neck.  I was alive and she listened to my story and verified my suspicions, an angel’s voice had saved me.

“Move the lightstand away” was really the most I could remember.  It was commanding.  It was reassuring.  It was my salvation.

It also wanted me to never doubt it’s existence again.

The seriousness of the situation didn’t really hit me until about four days after the event when I was drying off from a shower.  I looked in the mirror and there it was on my back, an electrical burn.  It wasn’t the elaborate pattern you see on the internet, but just a series of stripes burned into my back.  But it was a reminder of how I had escaped.  It was a puzzle piece of my survival etched into my flesh and blood.

I had survived.  The message was clear.  I have more work to do.

Below is the last photo I took before the lightning.  Beautiful, dramatic and one I’ll never forget.

And for those of you wondering, I don’t have any superpowers.  Unless you count hearing angel voices in my head.