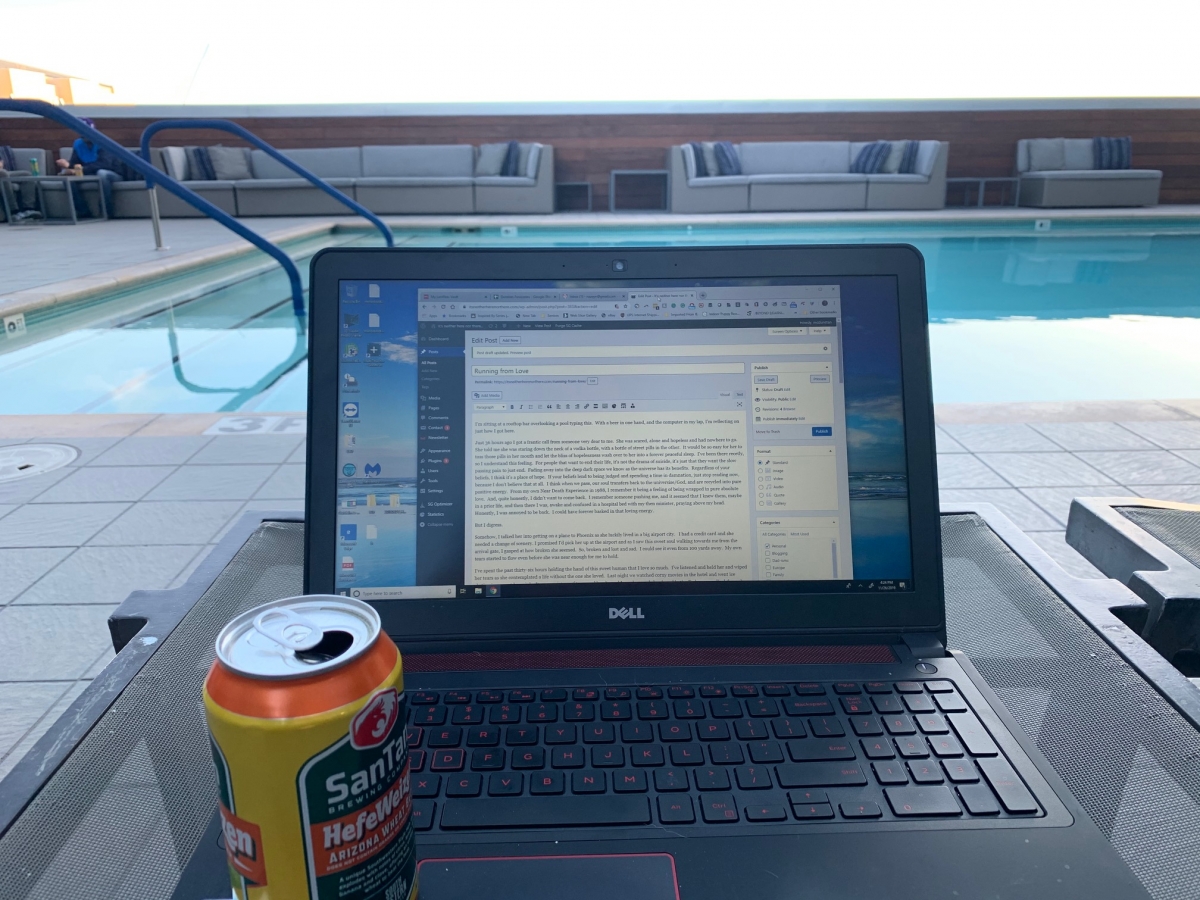 I’m sitting at a rooftop bar overlooking a pool typing this.  With a beer in one hand, and the computer in my lap, I’m reflecting on just how I got here.

Just 36 hours ago I got a frantic call from someone very dear to me.  She was scared, alone and hopeless and had nowhere to go.  She told me she was staring down the neck of a vodka bottle, with a bottle of pills in the other.  It would be so easy for her to toss those pills in her mouth and let the bliss of hopelessness wash over to her into a forever peaceful sleep.  I’ve been there, so I understood.

Somehow, I talked her into getting on a plane to Phoenix.   I had a credit card and she needed a change of scenery. I promised I’d pick her up at the airport and as I saw this sweet soul walking towards me from the arrival gate, I gasped at how broken she seemed.  So lost and sad.  I could see it even from 100 yards away.  My own tears started to flow even before she was near enough for me to hold.

I’ve spent the past day and a half holding the hand of this sweet human that I love so much.  I’ve listened and held her and wiped her tears as she contemplated a life without the one she loved.  Last night we watched corny movies in the hotel and went ice skating in our outdoor rink.  It was a mixture of tears and laughs and I was honored she shared both.  Today, we walked through the zoo and paused at her favorite animal exhibits.  The flamingos were her favorite, which honestly surprised me, and she laughed at their cooing sounds and funny gestures.  It was so sweet to see her happiness rise to the surface and giggles that I once remembered as being a regular constant.  As we walked the park, she talked faintly of dreams lost, of how she made so many wrong turns in just her short life and she cried more.  And, I cried right there along beside her.  By listening to her stories, though not her conscious doing, she was blocking love from coming her way, with the deep unknowing sadistic game, that if she pushed away, she wouldn’t be hurt in the long run.  My beautiful friend was running from love faster than Bo and Luke Duke ran from Roscoe P Coletrane in the General Lee, and I know that feeling all too well.  The cruel truth is, however, you can’t ever win when you push love away.  The only thing you’ll win is loneliness and a broken heart.  Hardly trophies.

I’ve been in therapy more in the past three weeks than in the past five years and so I tried to bring some insight to this situation as I could see her problems were similar, maybe even the same.  I’ve unraveled things about me that are dark, disturbing, sad and painful.  Some things were new that had been buried in the corners of my heart.  But, I’ve also uncovered hope and tools to raise my frequency of love and communication.  I’ve journaled,  yelled, broken dishes, and walked more miles in the dark than I want to admit.   But the thing that’s kept me going, is love and how I don’t want to run from it anymore.  I shared my story and some new tools and I saw a glimmer of hope arise to her surface.  She laughed and admitted maybe she too, was running from love.

But why?  Why would someone outright run from something that feels so good.  It’s because of the many layers, usually in childhood, where you’re taught that you’re not loveable and that love has conditions.  Some of us are raised by individuals who teach otherwise, but for my parents, it was all conditional.  I wasn’t offered love unless I performed, or was perfect or funny.  I remember once my mother mocking me for genuinely hugging people with all my might.  “Melissa, people are going to think that kind of hug is inappropriate”.  It was the small messages that formed my actions and kept me from allowing my heart to fully open, not just to men, but even to friends.  I was always skeptical and assumed they liked me for what I could offer, if I was just generous enough, funny enough, volunteered enough, worked too many hours for too little pay, if I saved the day at the expense of my own family, if I was smart enough to solve their problems while ignoring my own..then, maybe then, they’ll love me.  Others have different stories.  As I became an adult, I just assumed I wasn’t worthy of love, no matter what I felt.  I was far from perfect.   It’s just so sad I can’t even think about it sometimes.  It’s only been in this month that I realized, I am enough for love.  I don’t have to do anything, prove myself or win it over.  Love is enough if offered freely and without restrictions or conditions.  My mind is blown.

During my last two days in this big city, I’ve been paying attention to couples.  Particularly, those who seem to love with no boundaries.  Today at the zoo, a man stopped his wife and tied her shoe so she wouldn’t trip.  After he finished, he sweetly ran his hand up her leg and must have said something suggestive as he grinned and she reached for his cheek and drew him in for the softest kiss I’ve ever seen.  They both laughed so sweetly that it made my own heart swell up.  This level of intimacy is something that would have made me so uncomfortable this time last month.  But now, how I long for that level of love.  I guess therapy works.

So who was that young lady who came to visit?  Well, she’s now gone, but in reality, I’m looking in a mirror right now and the reality punches me in the gut.  It’s also me.  It was also me, thirty years ago, so hurt, so sad and so hopeless.  Staring down a bottle with a handful of pills in the other.  It’s not my first time down this road, but damn, I hope it’s my last.

The hardest part of problems is facing them with grace and love.  To be kind to yourself all the while knowing that dying from a broken heart is a real thing.  To be able to look at yourself in that mirror and recognize patterns around love and avoidance and of course, the important part…to be able to put your foot on the path of recovery.  That instant.  That moment.

For now, I’m gonna keep going to therapy, journaling, walking in the dark and breaking dishes.  My goal?  I ultimately want that intimate kiss in the middle of the zoo with hundreds of people watching.  I want the kind of love that makes everyone else around blush. The kind that always wins.  And I’m well on my way down that path of discovery, even if just with a few steps.

The Way Out of Fear

When I was a little girl, I was pretty joyful.  I remember people telling me…

Do you have a Brain Bouncer?

#ThrowbackThursday to 1984 and as far as I know, the only family portrait we ever…